As most of us know, we have had a looney running around spewing hatred about other people. This invariably caused a lot of people to get really, really, really mad at this looney.

See, looneys are different from the average idiot. There are loads of idiots out there who are idiots simply because they are misinformed. I get pissed offed because these idiots think they are right when I try to re-educate them. Yet, I believe idiots can be brainwashed, simple because they are idiots in the first place. On the other hand, it is a much simpler process with loonies.

With looneys, their logic goes beyond comprehension. For example, if you see a dead cow by the roadside and next to it, there is a crumpled lorry, we can all assume that the lorry banged the cow. An idiot will however tell you that the cow banged the lorry and then dropped dead. But the loonies? They are the best. They will tell you that an alien spaceship landed in the middle of the road, killed the cow and smashed up the lorry.

Anyway, since everybody from blokes with dodgy facial hair to animals like tigers, penguins, ducks and geckos are feeling little looney, I have decided to join the gang. Therefore, all my posts for this week would be of a looney variety. Whether or not I really believe it is irrelevant - what's more important is that I wish to be a certified looney by the end of the week.


You know all those stuffs about being gay and all? You know, the argument of whether being gay is in-born or a perversion? I was thinking that it's a perversion of some sort, but then some scientists have been saying it could be in-born. Nevertheless, that is all irrelevant because sexual behaviour CAN BE perverted too. Like, humans didn't grow up with a natural instinct to screw horse and goats, yet some people do that. That means, even if it was a natural thing that some kids were born gay, you could actualy perverse their sexuality and turn them into straight little kids.

I was watching Thundercats yesterday and then I remembered, like ALL LITTLE BOYS at that time, I had a MASSIVE crush on Cheetara. 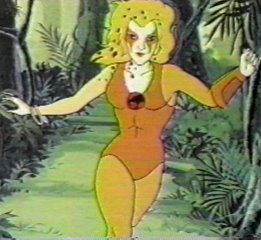 And heck, it wasn't just Cheetara. Cartoon chicks have this weird pull on little kids, for some sick twisted reason which I cannot possibly fathom. First, when you grew up there was always Smurfs and you wondered how come Smurfette, with all her blonde hair was the only female Smurf and how come she got to be so hiao towards the Smurfs (even Papa Smurf) and how come she ran around wearing her skimpy pyjamas. 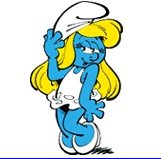 Yes, and after the Smurfette crush came Cheetara, which is a natural progression, one might assume. Kids progress from weird creatures in their vivid imagination, then to some weird half animal (pussy) half human chick, and then finally to a proper Princess, the Goddess of all kiddy crushes. It was a great cartoon because He-Man was cool, and then you also had Teela and The Sorceress on top of She-Ra with the huge battlecat. This is something Disney blatantly ripped off when they did Aladdin which had Princess Jasmine (another hot chick) and her pet tiger. 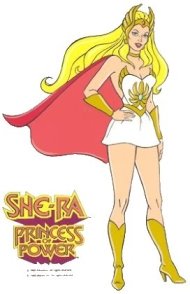 Even if a kid was born gay, after watching Cheetara and She-Ra (possibly wondering whether She-Ra, Teela, and the Sorceress sleep in the same bed), that kid would be perverted into being straight, no shits. This only goes to show that cartoons are nothing short of awesome in preventing gayness. A deprived childhood would see your kid turn gay.

And actually, kids these days face a worrying future. There are NO HOT CHICKS in mainstream cartoons these days! There's Dexter's Laboratory, Cow & Chicken and shit like that. The closest they get to seeing a hot chick is Powerpuff Girls, and heck, the Powerpuff Girls aren't even close to being as hot as the Little Mermaid and her sisters.

But please don't misconstrue this as a call to allow your kid to watch just any show with a hot chick in it. Sometimes, it can do more harm than good. If your 3 year old son watches or plays with the below cartoon, then you have loads to worry about. 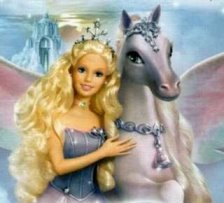 Ramblings:
The kid could be interested in the horse-thing? No? ;P

There could be a million and one thing that may cause homosexuality. One cannot exactly point a finger to childhood and the visual consumption they experience at that period of time.

If based on your analysis, what is the real difference between She Ra and Barbie? What makes She-ra a somewhat "good" influence while Barbie's not? Both are hot chicks no?

ken : One word of advice....don't take the above (and below) shit seriously.

She-Ra is He-Man's sister. She fights evil and looks hot. Barbie does nothing but look pretty all day. That is evil in itself, not to mention VERY VERY GAY.


My childhood crushes were Wonder Woman and the three chicks on Josie & The Pussycats.

All those new characters that came up in the 80s were merely variations of the original princess of power, Wonder Woman.

NO LA. They were brother and sister la. I remembered it from before and just google searched to confirm.


Errmmm, I definitely wouldn't want a girl who "fights evil and looks hot".

I just want one that's lovable and fuckable. (I guess that explains why I never liked Cheetara, her nipple-less tits aside)


vincent...people take your posts seriously. do be less careful with the power in your hands. please.


um... kid should have enjoyable childhood... since it can only be experienced once... i believe you led your childhood with your own beliefs and choices at that time, right? (you said you are smarter than others and blah blah blah) they have their thinking as well... um... if my kid loves barbie and i can afford that, i would try my best to give him/her... and hehe kids are so INNOCENT that i believe they might not be able to think this much... and um...i don't know most of the cartoon characters you have discussed although i am same age with you... probably i am an idiot can't really remember those childhood memories... i just remember Popeye the sailorman and um.... transformers... influenced by my dear brother and cousins...


lishun > some people tend not to take blog posts with a pinch of salt, but i think in a way it's kind of amusing for the rest of us who do. btw, i think u meant "more careful". =)

vincent, u're making me nostalgic lah. i rmb teenage mutant ninja turtles had a hot chick too. i miss the carebears! ahahahahahaha.


lishun : I get your drift, but I specifically said it was LOONEY.

jin : Carebears?!!?!? Nabeh. Dude, carebears is the epitome of gayness. Her name was April O'Neil, btw.


but...but... this guy is a barbie collector wor.. http://img.photobucket.com/albums/v308/siewjang/dingds9jq.gif


ah yes....april. thanks for the flashback. and yeah, the carebears were....kinda gay.

hijackqueen > btw, hijackqueen, collectors are usually grown up ppl who realise the importance n value of certain things...so they collect barbies, transformers, etc, because those things have value. but they're grown up so they're kinda immune to the little subliminal messages from stuff like barbie which can influence innocent little kids.
LOL i'm not understanding a single word i'm typing....maybe it's finally time to sleeeeeeeeeeeeeeeeeeppppppppppppppp.............