And so it is, another day in the life of our country. Another page written in our history books. Another chapter in the story of a country going through mid-life crisis that she is constantly unsure of her next course of action.

I was about to say that this is my beef with all religion, but then the wife reminded me that it is not religion that is bad, but it is the intepretation of it that sucks. I don't care about what any religion has to say about this issue. Personally, the less said, the better. My selfish reasons into my interest in this issue is the fact that I see my country torn apart by incidents like this. I don't care who is right or wrong - as long as we can somehow integrate all the races and religion in this country - it would suit me just fine.

Religion...has certain ideas at the heart of it which we call sacred or holy or whatever. What it means is, "Here is an idea or a notion that you're not allowed to say anything bad about; you're just not. Why not? – because you're not. If someone votes for a party that you don't agree with, you're free to argue about it as much as you like; everybody will have an argument but nobody feels aggrieved by it....But on the other hand, if somebody says 'I mustn't move a light switch on a Saturday', you say 'I respect that.'

There is a certain foodcourt in Hicksville which has awesome food. Unfortunately, it is also the epitome of what religious beliefs does to national and racial integration: 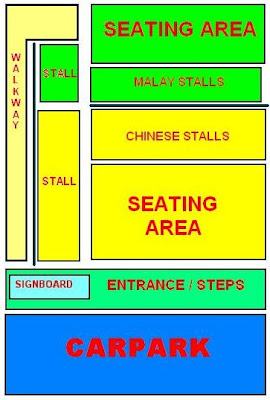 You park your car and walk up the steps to the foodcourt. If you a Muslim (and hence, in most cases Malay) then you read the big signboard that says HALAL FOODCOURT with an arrow that leads you to a covered walkway along the outside of the non-halal foodcourt even though there is a perfectly accessible walkway through the main foodcourt.

A visit to that foodcourt demonstrates the most blatant segregation of the races that you ever see, but one that happens all around this country, albeit with less obvious indications. You have Chinese and Indians sitting on one side of the food court and Malays sitting on the other side, so blatantly segregated you are reminded of the blacks in America that were forced to sit at the back of the bus. Except that in this analogy, you aren't quite sure who the blacks are.

So how now brown cow?

And so, the problem lies in the interpretation of things. I reckon, people should stop listening to the interpretations they hear from some bloke in robes (nevermind the colour - be it white, black or yellow/orange). Your interpretations are for you and you alone. The problem (or issue, whichever word you prefer) with religion is that the consequences are in the afterlife. People are afraid that the decisions they make today will come back and haunt them when they die, but they so conveniently forget that the decisions they make TODAY has an effect TODAY.

Your Chinese friend invites you to his wedding. Do you decline because there will inevitably be a baby pig staring back at you at the dinner table? You are madly in the loop with a Christian dude. Is it right to let go of the only man who ever loved you because you are afraid of what happens in the afterlife? And is it right for someone to stop you? The decisions you make today affect you NOW. What is the right thing to do? How can it be that something so pure and so good like religion be allowed to cause endless moral dilemmas?

I asked a lot of questions that cannot be answered. My main purpose for all this is because I love my country too much to see religion tear it apart the same way it is tearing this world apart. I don't ask you to agree with me, neither do I invite you to scream at me. I just ask that you think about all this and process it through and through.

to be honest, i was rather relieved the verdict didn't swing her way; relieved, but unsatisfied, nonetheless. still, there are some things that do need to be accepted and respected (not tolerated, that ugly word). last thing we need is a broken country.

maybe there will be greater...maturity in malaysia in the future, hopefully when our generation takes the reins of the country in 30-40 years' time, but definitely not now.

it saddens me, but every day serves as a reminder that change has no place here just yet.

Racial integration has never been in malaysia only racial tolerance, forget the food court just look in primary schools and chances are you can already find students who play with their own race as they grow older it becomes even more apparent but then again these kids are not sure what religion is really so why is it that they choose to stick with their own? It's not only religion it's human nature to stick to what is familiar


I remain an advocate of the "Bangsa Lain-Lain / Campur" solution.


birds a feather flock together.

having studied abroad, i realised that most people will tend to stick to their own race. Malays with malays; chinese with chinese etc...

This barrier is hard to break.