"Shit man that's a shit load of food. I dunno about you guys, but normally I shit like once or at the most, twice a day. But the last 2 days right, I have been shitting like 4 or 5 times a day....too fucking much food man!"


I think the significance of Chinese New Year is slightly lost. Besides getting the free money (which is always welcome), besides the food and the booze, besides the mahjong and poker, what else is there?

But still, I have been told I am a chink, so that is why I celebrate Chinese New Year.

HAPPY NEW YEAR everybody, and may this year bring you good fortune and good health. Because with those two, there is pretty much nothing else you can ask for.

Except good sex, but that comes automatically with the first two.

i-am-not-shitting-you story of the day

I was queuing at the local KFC (which incidentally has suffered a big drop in business since the 'zionists' started killing innocent people). On a side note, I am not sure I fully understand what 'zionists' are and I am damn sure not many other people fully understand what that term is either. I am also not sure how fried chicken relates to missiles, but that is a story for another day.

Anyway, this bloke in front of me was ordering food for his family. He ordered a Zinger Tower set meal which came with a 'free' watch:

I have nothing much to say except show you a comic that was drawn 15 years ago, and remind you why I worship the Calvin & Hobbes comic strip... 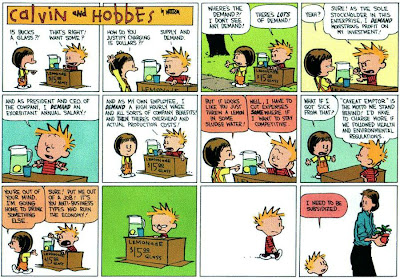 No matter what the Anwar fan club says about him, he's certainly not a two faced hypocrite and he speaks his mind. Yes, he's done loads of naughty things, but I feel his contributions outweigh all those stuff. So, yes, I like him.

Which is why I am kinda worried about the fella.

Although his sarcasm is still very much in place, some of the things he seems to be saying these days has been at times ridiculous and senseless. I fear he might be getting senile, which would be a great shame.

Take for instance his latest outburst against Isreal and the Americans.

Yah, I get it. You hate Isreal and are pissed with the Americans for getting into bed with them. But then to call for a boycott of American products is kinda dumb. But why discriminate McDs, KFC and Starbucks?

Is this proposed boycott a two-way thing? Are we just going to stop buying their stuff, or do you also propose that we stop selling things too? Because the way I see it, if you are supremely annoyed with someone, you would cut off all relationships with the person. That would put us in greater shit that we are already in since the US is our second largest trading partner.

If you ask those burger flippers at McDonalds to quit their jobs, where do you propose they work? And hey, while you are at it, do you also ask the thousands of workers in Intel, Dell and Western Digital to walk away from their jobs? How about the banks? Citigroup? Let's take it a step further, shall we? Shall we ask the fellas in the Esso refinery in Port Dickson to walk away from their jobs? Sure, we would be choking our country of 15% of our fuel supply but never mind la, we need to bankrupt those naughty Americans!

And while we are at it, since we are going to stop drinking Coca Cola* and stop brushing our teeth with Colgate. should we also shut down all our power plants that run GE gas turbine and hydroturbines? The next time you require an MRI, please ask your doctor if the MRI machine is made by GE, and because you wouldn't like to use American made products, please decline the MRI. Do we need to boycott MAS too, since they fly Boeing airplanes?

(*sidenote: The Muslim Restaurant Operators Association has removed Coke from the menu at thousands of their restaurants - how about Pepsi!?!)


And finally, after you read my blog, please uninstall Windows, yeah?

"You men are so shallow lah"

"So what? We're not sitting for an exam here."

"What rubbish!? Being smart takes effort, okay? All the studying, all the reading...I got my first class honours by studying a shit load okay!"

"And you don't think all those models just woke up one day and managed to look stunning by doing nothing? You had nasi lemak for breakfast and briyani for lunch...you think the models can afford to do that? You think they can indulge their every craving for chocolate? You spent hours in front of your books, they spent hours in the gym! How long do you spend in front of the mirror before you step out of your house? How long do you think they spend? Is that not time and effort? Time and effort that you and her didn't bother investing in? I like smart. Heck I love smart people. But don't demean pretty people while you're at it."