Three years in this Hicktown, and I had never been clubbing here before. In fact, it's been a while since I had last been clubbing anywhere. One of the signs of old age is the tendency to avoid loud noises. Don't get me wrong, I have been boozing in Hicktown before, but in pubs. Dodgy ones even. (sidenote: this post reminds me - I still owe a part 3 to the boozing stories in the link).

So when my friend Mel asked me to come along on Friday, I jumped at the chance of doing something new in this Hicktown (which usually equates to an awesome story) and also getting some booze into my system. Also because I was assured there wouldn't be any fengtau music since her friend from KL was the guest DJ for the night.

The story starts off in my house when I get out of the shower and I realise I don't have anything to wear to the club. Now, this is not like some woman going, "Oh my God I have nothing to match my new handbag!" This was me, literally not having anything suitable to wear to a club. Most of my wardrobe is in my house back in KL. Most days I wear old t-shirts to work - my job calls for it. On more formal days when I have to attend a meeting of sorts, I wear a standard company issued work shirt. Only very rarely do I wear a long sleeve shirt to work. If and when I go out at night, I usually throw on a nice t-shirt.

I make do - I find the most casual long sleeve work shirt that I have, and a pair of khakis and decide to wear that. Heck, I looked like I was going to work instead of a club. See, where I come from - the standard dress code for a club is a collared shirt (or at least a polo shirt). Heck, I've even seen people denied entry into a club because they were wearing sports shoes.

So how the fuck was I to know, that in this stupid jakun infested town, there is apparently no dress code for clubs?! I mean - none at all. I walk into the club (no cover charge even) and the first bloke I see is wearing bermudas and a pair of Nike Shox!!! FUCKING bermudas!! In a club! What the fuck, man? I mean...the last time I went clubbing, my friend was celebrating his birthday and two of his guests weren't allowed in because they were wearing round neck t-shirts!

Nothing of note happened the rest of the night, partly because I had good company and partly because the music was great (did I not mention the DJ was a KL bloke?). But then sometime around 1.45am, when our bucket of beer was almost finished, and I was going to order summore, Mel came over to me and said:

"Hey, don't order too much more"

Why am I even surprised? Every aspect of life in this Hicktown has been a great big culture shock. Yes, I am pretentious. Yes, I am elitist. Yes, I come from the big city and yes, I mock these stown (small town) folk.....but I should be used to this shit by now. If there has been a constant it is the fact that this is one country, but the people are worlds apart.

In today's newspapers - ACTUAL headlines which you WISH were accompanied by the following stories:

In a move that is bound to incense the rakyat, the government has decided to increase the toll rates after 6 more Mat Rempit were killed when they rear ended the ass of a water buffalo which was trying to cross the road. While the Rempits cannot be stopped and should be rehabilitated instead, the toll rise is meant to keep out poor farmers from allowing their livestock to roam the streets.

In a rare display of solidarity in accordance to the 1Malaysia concept of together-getherness, politicians on both sides of the fence (including those on the fence) were egging on the injured water buffalo to pass motion. The water buffalo was believed to be suffering severe constipation after an earlier road accident saw the head of a Mat Rempit lodged up the animal's behind. After several motivational speeches by maverick Anwar Ibrahim, the water buffalo finally managed to pass motion. However, the limelight was stolen by Barisan reps who walked out when they found out that...

A friendly football game between Barisan and Pakatan turned ugly as Maverick Anwar yesterday attempted to disqualify BN's Prosecution FC by writing to FAM and the MACC alleging bias against PR's Defence FC. In the letter, Anwar claimed that the referree appointed for the game was the father of one of the dead Mat Rempits. He claimed that the referee would be 'biased' since he was seen to have been taking sides with the water buffalo over the Mat Rempit.

The referee, who refused to be named was seen wearing a Liverpool jersey when he told reporters, "Daddy tak bias...." He also warned Anwar to retract his accusations or to face a RM100 million lawsuit.

throw 'em all in jail

1. Almost two years ago, in the aftermath of the BERSIH rally, I wrote an article calling the protesters hypocrites. I wrote, "A rally could have been held in a stadium where like-minded people could go and stay out of everybody else's way." Two years on, and a new government later, the Prime Minister says the exact same thing. No, I am not one of his advisors. I don't think he reads my blog either.

2. To refresh all your crappy memories (Malaysians do have crappy memories, which is the only explanation as to why people support Anwar Ibrahim), after the elections, the opposition blokes held a series of rallies in stadiums. In fact, wasn't this the largest rally since the elections? Why did they take to the streets after so long? What happened to their stadiums? Clearly, it was because the stadium rallies did not garner enough publicity and did not pull a large enough crowd.

3. Now, after people go for the street demo, they come back and complain. Because that is what Malaysians do. Idiots go for the rally fully knowing what to expect. Tear gas and water cannons. Isn't that what happens EVERYTIME? Only idiots do the same thing and expect different results. Want to make yourself a martyr? Good for you. Go there, stand in front of the water cannon, get shot like a rag doll by the water jet, then come home and keep quiet. You go there and challenge bullies who are stronger than you, and then expect them to treat you well? Are you fucking mental?

4. It's a good thing they have started to prosecute people for taking to the streets as they please. You fellas keep going on and on about how it is your civil rights to go and protest and shit. WRONG. It is not your bloody right. It is against the law. Just because you don't like the law, doesn't mean you can ignore it. Just because it goes against your perceived notion of 'freedom', it doesn't mean that law doesn't exist. Don't like the law?!? Too fucking bad. Next elections, gather all your friends and family to vote for the party who would uphold your notions of democracy. If that party doesn't win, that means the rest of us don't agree with your notion of 'freedom'. That is the essense of democracy, kapish?

5. Then you fellas also keep making noise about the police. "Police supposed to fight crime, not beat up innocent people." Okay, wait there. None of those people are 'innocent'. But let's not argue on technicalities, okay? Because you people are really talking out of your butts. If you people were so concerned about the police force and their role in demonstrations versus their role in fighting crime, you would know that in demonstrations and rallies worldwide, police have to be deployed for crowd control. In the recent G20 summit in London, the extra deployment of police cost GBP 8 million, to control a crowd of 5,000 people. Are you people mental!?!

Some things people get. Some things come naturally to certain people.

Yasmin Ahmad obviously had both the experience and the gift to share it without shoving it in your face.

This one though....he obviously doesn't quite get it. Yet. 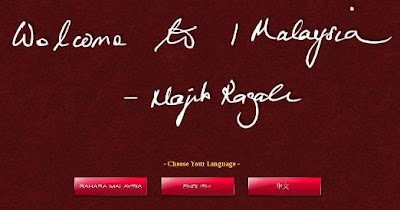 screen shot of the 1Malaysia homepage
Step #1 : Welcome to 1Malaysia.
Step #2: Please segregate yourselves right now into orderly groups and click the button according to your groups. Thank you.

I say 'YET' because I hope he will get it eventually.

I don't care about the politics, but I do want him to 'get it' for our sakes. It is one thing promoting a togetherness. It is totally a different thing blatantly segregating people according to the races right from the beginning.